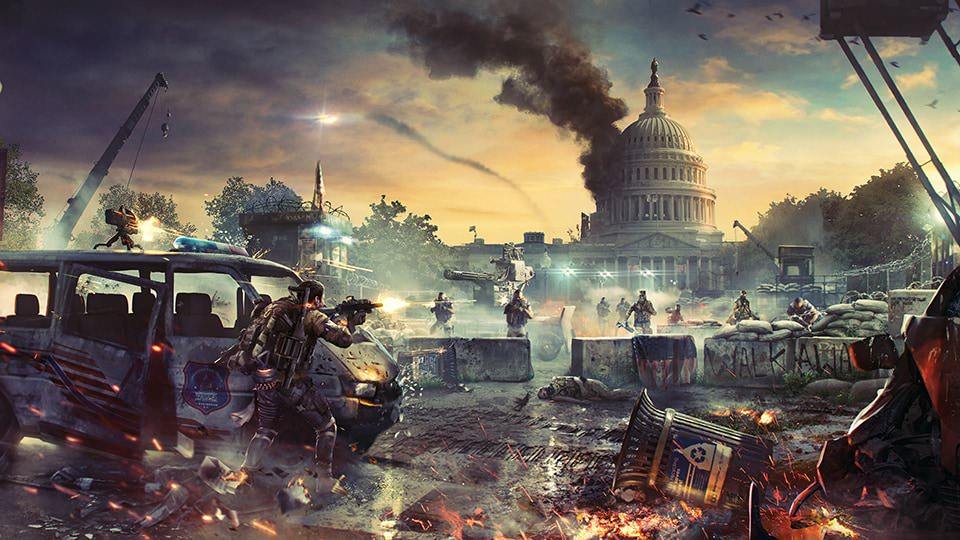 We’re back with our series of deep-diving development blogs about The Division 2 – Intelligence Annex. This time we’re digging into the lore of the game by revealing the story and background of one of our iconic factions – True Sons.

A former JTF unit turned paramilitary group – True Sons are a group of radical mutineers and trained criminals determined to eliminate all enemies and rivals in their pursuit of domination. Known for their brutal discipline and complete apathy, they are a highly coordinated and dangerous faction. According to them, America was founded through bloodshed, and through bloodshed, a new society will rise. Whatever it takes, True Sons will be at the top of the food chain.

THERE IS NO ROOM FOR WEAKNESS. COWARDS DIE ON THEIR KNEES. IT’S GONNA BE GREAT.
– ANTWON RIDGEWAY

When the pandemic broke out, chaos and panic spread across Washington D.C. In an attempt to control the spreading of the virus, the JTF established a quarantine on Roosevelt Island. Colonel Antwon Ridgeway was given the responsibility to administer the quarantine and ensure that everything ran smoothly. Seeing all the tragedy and despair caused by the virus, Ridgeway started to lose faith in the JTF’s ability to save Washington D.C. He quickly came to the conclusion that there was no way they were all going to survive.

As a strong believer in the need for authority and discipline, Ridgeway decided to take matters into his own hands. In frustration and fear for the city’s future, he deployed guards around the quarantine with the order to not let anyone out. He started to redirect resources coming into the quarantine, letting people starve to death and withholding medicine. In his eyes, the sick and the weak were already dead, so his number one priority became to secure the future of his own men.

Ridgeway’s actions were tainted by his willingness to do whatever it took for the wellbeing of his soldiers and his repulsion of the sick. Due to the chaotic state of the city, he was able to abuse his authority for a long time before the commander of the JTF found out and he was imprisoned. However, it did not take long until loyal members of his unit freed him.

In Ridgeway’s eyes, he had done nothing wrong. According to him, he was the only one with a realistic and viable solution to the situation. Therefore, the betrayal of his fellow officers filled him with rage and hate towards the JTF and the federal government. As soon as he got out, he gathered men from his former unit and the stockade where he was held prisoner. Together they captured the JTF officers that had imprisoned him and held a symbolic tribunal for them, only to execute them all moments later – and so True Sons were born.

According to True Sons, survival of the fittest is the only way to survive in Washington D.C. Due to their access to weapons, equipment, and expertise, True Sons are now the top dogs in Washington D.C. This newfound power has made them into vicious and arrogant bullies. Intimidation, cruelty, and violence have become the key factors in the True Sons’ paramilitary dictatorship.

True Sons do not think twice about making examples out of people to further ensure obedience. Either you join them, or you die. Whoever and whatever stands in-between True Sons and General Ridgeway’s position as absolute rulers of Washington D.C. will be eliminated.

Tom Clancy's The Division 2: E3 2018 Official Gameplay Trailer | Ubisoft [NA]
Watch this video on YouTube.
This trailer features some of the True Sons archetypes that you will encounter in The Division 2.
ALWAYS BATTLE-READY

True Sons are very combat competent. Training and discipline is important to them, which becomes apparent with their strategic approach. When you engage in battle with the Sons, they will spread out and come for you from every angle. This means that you will have to keep moving and look over your shoulder at all times.

When you start picking them off and they become fewer in numbers, their behavior will change. They will get more desperate and erratic, which will lead them to eventually give up on their strategy and charge at you to take you down at all costs.

The ten different archetypes within the faction will have their own unique behavior and mechanisms. Depending on which special ability the archetype has, that will also act as their weak point. For example, the Medic archetype’s special ability is his shock pads. With them, he can revive allies and shock enemies. If you shoot these shock pads, they will get destroyed, everyone around him will get shocked, and he will lose his abilities.

Be sure to join us over on the Official Forums[forums.ubi.com] or on the community Reddit to discuss today’s article; we’d love to hear your thoughts!

We will be releasing these articles regularly, so remember to keep an eye out!