Scientists prove it: Cloud Gaming is not green!

First of all, a few reminders

The cloud is defined by universal access, from any type of terminal (laptop, workstation, tablet, smartphone), to its data (documents, music, videos, video games…). It is intended to be highly flexible: a user can immediately mobilize storage capacity or computing power.

Unlike the collective imagination and the term used to characterize it, the cloud is physically present on Earth. Indeed, its infrastructures are hosted in data centres where they are shared.

The cloud Gaming is similar to the video-on-demand technology but it  allows you to play video games normally on your computer screen or television while it is running on remote servers that return the video of what has been played in streaming. This service requires a high-speed connection to the Internet network to avoid delays.

So is the cloud gaming really green?

Computer games have come a long way since the first Atari titles of the 1970s. Today’s mind-blowing graphics and sophisticated storylines, however, bear an energy cost. A high-end game today might draw 50 times more electricity than good old Pong and its simple bouncing ball. 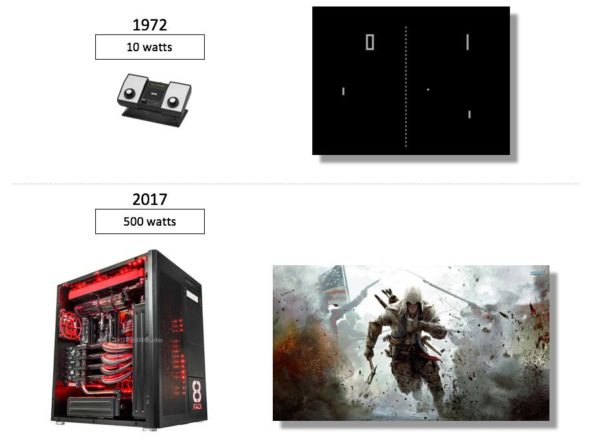 This is leading to a significant carbon cost for the video game industry.

Scientists prove it: Gaming is not green!

Compare to the global energy use of video game industry, researchers report a figure of 12 million tonnes of CO2 per year for the United States (2018), which represents the equivalent of 2.3 million passenger cars!

Theys stated that most gaming PCs were found to have larger power draws than consoles such as Xbox or PS4, but that doesn’t always result in larger annual energy consumption, since annual gaming hours differ between the platform types.

The Berkeley Lab team project a gaming-related energy demand that could rise by 114% in the near future.

“Among the biggest surprises was the very significant increase in energy use associated with cloud gaming, where energy-intensive graphics processing is shifted from the confines of the gamer’s home to centralized data centers” said Evan Mills, co-lead of the project.

In a 2019 study for the California Energy Commission, the Berkley team lab estimated for conditions prevailing in 2016, that cloud gaming adds approximately

Network and Cloud-gaming Energy is Often More Than Half of Total Electricity Use: 2016 Conditions 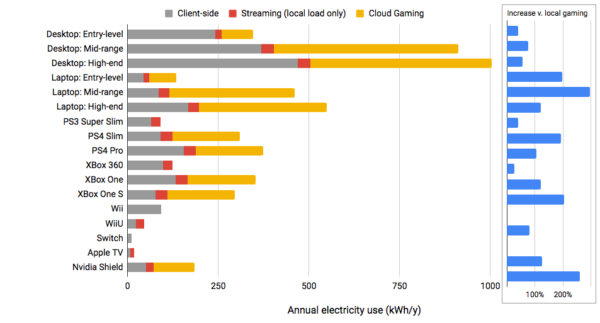 Cloud-based gaming is by far the most energy-intensive form of gaming via the Internet (compared to traditional online gaming or downloading games), and while the electricity intensity of networks is declining quickly, that of data centers is not.

This type of service, which promises to open the doors of video games to the greatest number of people, requires significant and very energy-intensive infrastructures to operate. Cisco, the American network hardware company, explains that video games with an annually growth of more than 50% could quickly overtake the streaming of platforms such as Netflix and YouTube, if cloud gaming met with the expected success.

While today streaming remains the main source of Internet traffic at nearly 58%, video games currently account for only 8% of global traffic. However, the situation could quickly change. If cloud gaming takes off in the coming years, video games could simply become the biggest consumer of traffic and, ultimately, energy.

In addition, by running our games on computers or consoles at home, we know more or less the impact of our equipment on our electricity bills.

With the case of Cloud Gaming, the energy footprint would be invisible to the consumer. And that is an element to take into consideration. First it can be seen as an ecologic move to switch to Cloud Gaming, secondly it can be a choice for users looking to lower their electricity bill.

In fact, when surfing the web, few of us really realize that the digital sector was already absorbing about 10% of the world’s electricity production in 2015.

What are the solutions?

Create a usage limit for video streaming or cloud gaming ? It does not sound possible in this age of compulsive use of smartphones.

Video games on the cloud will have a bright future, the number of players should explode thanks to subscription offers accessible to all budgets, which avoid investing more than 2 000 € in a gaming machine such as a new generation console or high end PC. 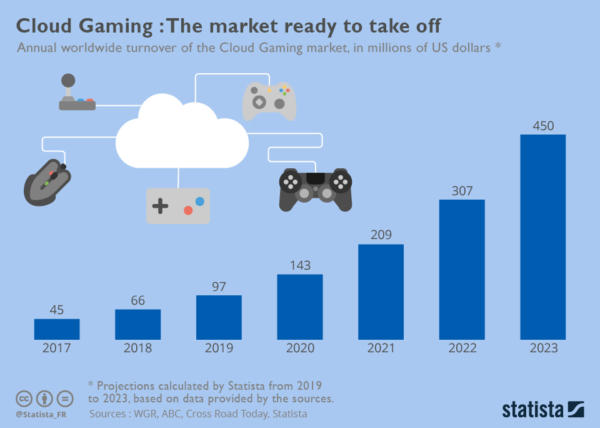 Nevertheless, in addition to the various issues that cloud gaming will have to address like Internet connection, server availability, the ecological impact of this new service remains a thorny issue. Google, for example, has announced that it will meet this additional demand by purchasing electricity from wind and solar farms, while improving the energy efficiency of data centres would also slightly limit this increase in demand.

Faced with the power of the giants of the web and mercantilist ideology, it seems that the essential thing is to inform and raise public awareness of the challenges facing the biosphere of Internet use. Everyone should be able to make informed choices, to influence political decisions relating to the digitisation of society and to support the organizations that are working to save our ecosystem.

The press and educational institutions have a fundamental role to play in this necessary awareness.

The best solution remain to use our technological environment at its best while the cloud gaming technology improve in term of sustainability.

The most efficient today is still downloading games to your own device and buy cheap Game Keys :

And don’t forget to unplug your devices, don’t let them in standby mode when it’s useless !

The post Scientists prove it: Cloud Gaming is not green!  appeared first on AllKeyShop.com.