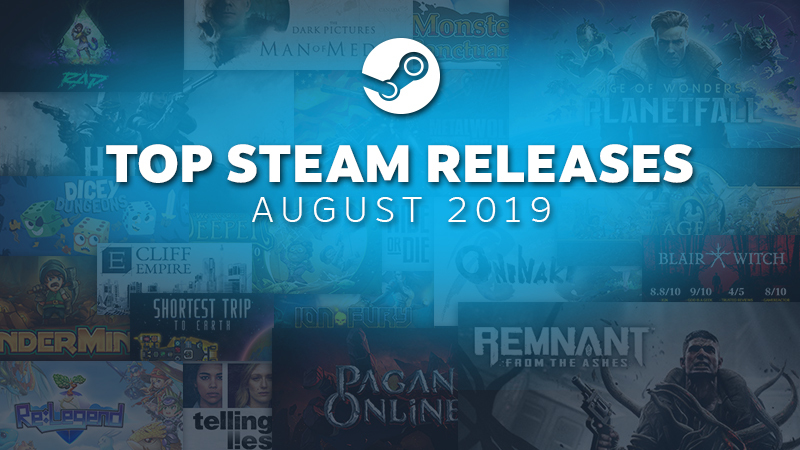 Global representation continues to be a huge theme this month when looking at where the top products are coming from. We were pretty excited seeing 13 countries represented in our last top release list, so it’s great to see that number already surpassed with 15 different countries this month (check each game for details).

It’s also inspiring to see that new developers are continuing to find success on the platform. With August’s list, we’re welcoming 12 development teams who are bringing products to Steam for the fist time (Hide or Die, Ion Fury, Shortest Trip to Earth, We Need to go Deeper, UnderMine, Monster Sanctuary, The Dark Pictures Anthology: Man of Medan, Re:Legend, Steel Circus, Hobs, Undefeated and Rise of Legions).

We thought it would be interesting this month to learn more about the teams bringing a product to Steam for the first time. Many developers come into the industry in different ways, so we caught up with some of these teams to hear a bit about their diverse backgrounds. Here’s what we learned:

Shortest Trip to Earth – Interactive Fate
The original team members met at The University of Tartu in Estonia. Edvin & Toomas were teaching a commercial game design course, while lead artist, Taavi, was one of their students.

Monster Sanctuary – Moi Rai Games
What started as a solo project for Denis, lead programmer, artist, composer, and designer, ended up becoming a family affair when his brother Anton joined to help finish the game down the stretch.

Rise of Legions – Broken Games
The team studied computer science together, learning to code in Delphi. It’s not historically thought of as a game language, but Rise of Legions is now one of the world’s most-used Delphi applications.

UnderMine – Thorium
Working together for a combined 30 years in the game industry, Clint and Derek spent countless lunch breaks talking about their favorite game mechanics and design elements.

UNDEFEATED – Undefeated Games
Created by three students of the Vantan Game Academy in Osaka, Japan. When development began, Yuma and Daigo were beginning their second year of study, with Fuko only in her first year.

Here is the list of August’s top new releases ordered by release date (we’ve added this list to a handy store page too):

Hide or Die – VecFour Digital (US)
Just arrived into Early Access – Large scale asymmetrical multiplayer horror. You can either fight against the darkness corrupting the world or embrace it.

Dicey Dungeons – Terry Cavanagh (UK)
In this fast-paced deckbuilding roguelike you’ll fight monsters, find better loot and level up your heroes as you work together to take down the Goddess of Fortune, Lady Luck herself.

Shortest Trip to Earth – Interactive Fate (Estonia)
Coming out of Early Access – Embark on a perilous journey across the universe in this roguelike spaceship simulator focused on exploration, ship management and tactical battles.

We Need To Go Deeper – Deli Interactive (US)
Coming out of Early Access – DIVE. DISCOVER. DIE. Crew a submarine with friends in a unique 4-player cooperative submarine roguelike set in a Verne-inspired undersea universe.

RAD – Double Fine Productions (US)
A 3D action roguelike set in a post-post-apocalyptic world, where humanity has faced Armageddon not once, but twice.

Remnant: From the Ashes – Gunfire Games (US)
Scavenge, upgrade and specialize in this third-person survival action shooter set in a post-apocalyptic world overrun by monstrous creatures.

UnderMine – Thorium (Canada)
Just arrived into Early Access – Adventure deep into the roguelike adventure of UnderMine and discover powerful relics, deadly enemies, hidden secrets, and a few friends to help along the way.

ONINAKI – Tokyo RPG Factory (Japan)
A fast-paced action-RPG adventure with deep character customization, powerful in-game cut scenes and a visual system drawn to convey the drastic contrast between the ‘Living World’ and the ‘Beyond’.

Hunt: Showdown – Crytek (Germany)
Coming out of Early Access – Competitive first-person PvP bounty hunting with heavy PvE elements. Set in the darkest corners of the world, it packs the thrill of survival games into a match-based format.

Pagan Online – Mad Head Games (Serbia)
Coming out of Early Access – Pagan Online is a fast-paced hack-and-slash action RPG that will challenge your skill in brutal and satisfying combat against countless enemies and larger than life bosses.

Steambirds Alliance – Spry Fox (US)
Coming out of Early Access – A massively-cooperative bullet-hell shooter! Fly with dozens of your feathered friends in an open world full of cruel cat bosses and endless waves of deadly bullets.

UNDEFEATED – UNDEFEATED Games (Japan)
Live the dream of becoming a super hero with unlimited powers as you fly through the city, patrol the streets and engage in dynamic high-speed mid-air boss battles.