How We Approach Story

Narrative Designer Jill here. As you know, we’re changing the story for Subnautica: Below Zero. I wanted to give you an idea of what goes into this process.

First, the basic requirements:
What you can count on (SPOILERS BE HERE!):
How does story come together?

Players sometimes say to me, “oh, so you’re the narrative person so you decide what the story is.” Not quite.

What I actually do when I arrive on a team where I’ve been asked to help evolve a new story out of the elements of an old one, is talk to everyone and find out things like:

We do a lot of brainstorming– what could we do in this or that space. What if a given character behaved in way X instead of way Y? We don’t just do this internally. We reach out and gather expert input from outside the team.

From there, it’s a lot of meetings about every element of the game– each cinematic, the way different environments will change or be employed differently.

How can the various game mechanics be used to tell different parts of the story? What can we reflect back to the player about their choices, through the way things in the game work, and the way the world and other characters respond to them?

Then I begin to sketch out the story overview, and try to imagine how the narrative can be split into all those bits that get scattered around the sea. I make complex diagrams no one else will ever read, but they help me ask the right questions and plan the right plans. 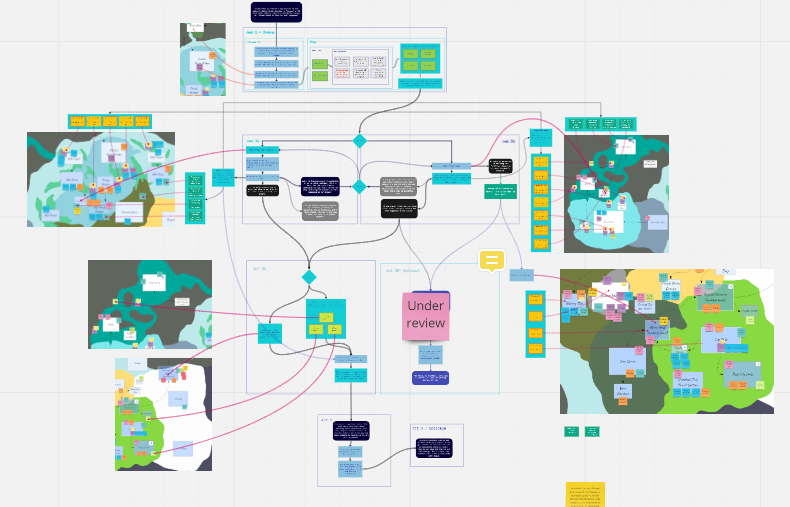 Most of this happens in a cycle. More discussions. More brainstorms. We come to a more refined understanding of what is possible. We revise, we cut, we add, we cut something different, we add again. I make a new set of diagrams.

When the meetings start to consist of less debate and more “so how do we do this?” that’s when we can really start setting both deadlines and story details in stone.

Then (finally?!) the writing and casting and all of the production of story stuff you’ll be able to see and hear and read in the game begins for real. But I’ll have to tell you more about that another time.

So what’s in this release?

The story updates you’ll notice in the upcoming release largely pertain to the way Subnautica: Below Zero begins:

We’ll have more to say about casting and how COVID-19 has impacted our recording process soon. We think it deserves its own post.

Thanks for reading, and if you have any questions, please ask in the comments. I’ll do my best to respond!