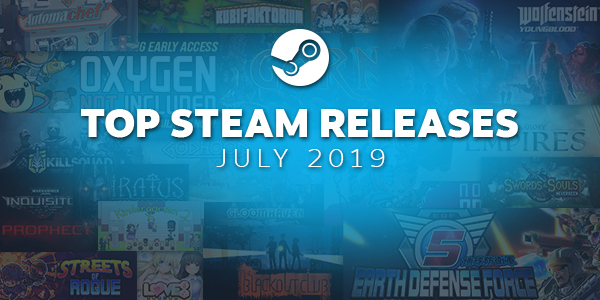 Returning to our monthly series of looking at popular releases, July brought a variety of exciting products. With this list, we’ll be looking at the top 20 products released in July, measured by revenue generated during the first two weeks after release.

Picking up where we left off last month, Early Access titles continue to be heavily represented. A total of nine games are either releasing into or launching out of Early Access. We’re also seeing more debuts this month from developers releasing their very first games on Steam. Killsquad, Iratus: Lord of the Dead, LOVE³, Nowhere Prophet, CUSTOM ORDER MAID 3D2, Swords & Souls: Neverseen & Streets of Rogue are all Steam firsts from their respective development teams.

Speaking of developers, we were pretty excited to see how diverse their global representation was this month. The development teams responsible for these games are based out of 13 different countries spread across five continents (Argentina, Canada, United Kingdom, France, Germany, Hungary, Japan, Netherlands, Russia, South Africa, Spain, Sweden, and United States). Steam players are represented in every region imaginable, so it only makes sense that successful games are coming from all over the world too. We’re all looking forward to a future top 20 featuring a game developed in Antarctica.

We have quite a bit of fun looking at these lists, while trying to find themes and features that the games have in common. About half of this month’s top 20 games support external input devices, allowing players who have controllers to engage with games in new ways. Co-op experiences are also represented pretty heavily this month, with eight games fully supporting the ability to play together with your Steam friends (EARTH DEFENSE FORCE 5, Killsquad, Streets of Rogue, Wolfenstein: Youngblood, Warhammer 40,000: Inquisitor – Prophecy, Dead Frontier 2, New Frontier and The Blackout Club).

Here is the list of July’s top new releases ordered by release date (we’ve added this list to a handy store page too):

Godhood – Abbey Games (Netherlands)
Just Arrived into Early Access. Build your roster of followers, level up their abilities and then watch them fight in a unique new turn based auto-battler experience. Released July 10th.

Field of Glory: Empires – Ageod (France)
Immerse yourself in grand strategy while exploring the intricate and living tapestry of nations and tribes, each with their own distinctive culture. Released July 11th.

Killsquad – Novarama (Spain)
Just arrived into Early Access – A Sci-fi themed ARPG experience, where you can choose your quests, level up to unlock skills and wreak havoc with a host of unique weapons. Released July 16th.

Gloomhaven – Flaming Fowl Studios (United Kingdom)
Just arrived into Early Access – This is the digital adaptation of the acclaimed board game of the same name, mixing Tactical-RPG and dungeon-crawling with plenty of replay value. Released July 17th.

Swords & Souls: Neverseen – SoulGame Studio (France)
A unique RPG where leveling up takes skill. Create, train and upgrade your character as you battle across the lands to foil an evil witch’s plans. Released July 22nd.

Iratus: Lord of the Dead – Unfrozen (Russia)
Just arrived into Early Access – A turn-based tactical roguelike RPG set in a dark fantasy universe. Lead an army of undead on a quest to reach the surface world and bring death to the mortal realms. Released July 24th.

Warhammer 40,000: Inquisitor – Prophecy – NeocoreGames (Hungary)
Take on the role of Inquisitor and embark on a massive campaign in this grim and atmospheric ARPG set in the Warhammer universe. Released July 30th.

The above list uses revenue as a measure of popularity, but as we mentioned last month, this doesn’t really capture the popularity of free games that players may be enjoying. So again this month, we’re adding a list of the top five free games released in July, measured (and ranked here) by peak player count within the first two weeks following release.

Dead Frontier 2 – Creaky Corpse Ltd (United Kingdom)
Online survival horror at its darkest. Level up your character and scavenge for scarce resources, trade with other survivors in a realistic economy and battle it out in gripping PVP combat. Released July 15th.

Supremacy 1914 – Bytro Labs GmbH (Germany)
Choose your superpower during World War I and wage war with up to 500 other opponents in this real-time grand strategy epic. Released July 16th.

And if you missed any of the previous month’s Top New Releases lists, check them out here: