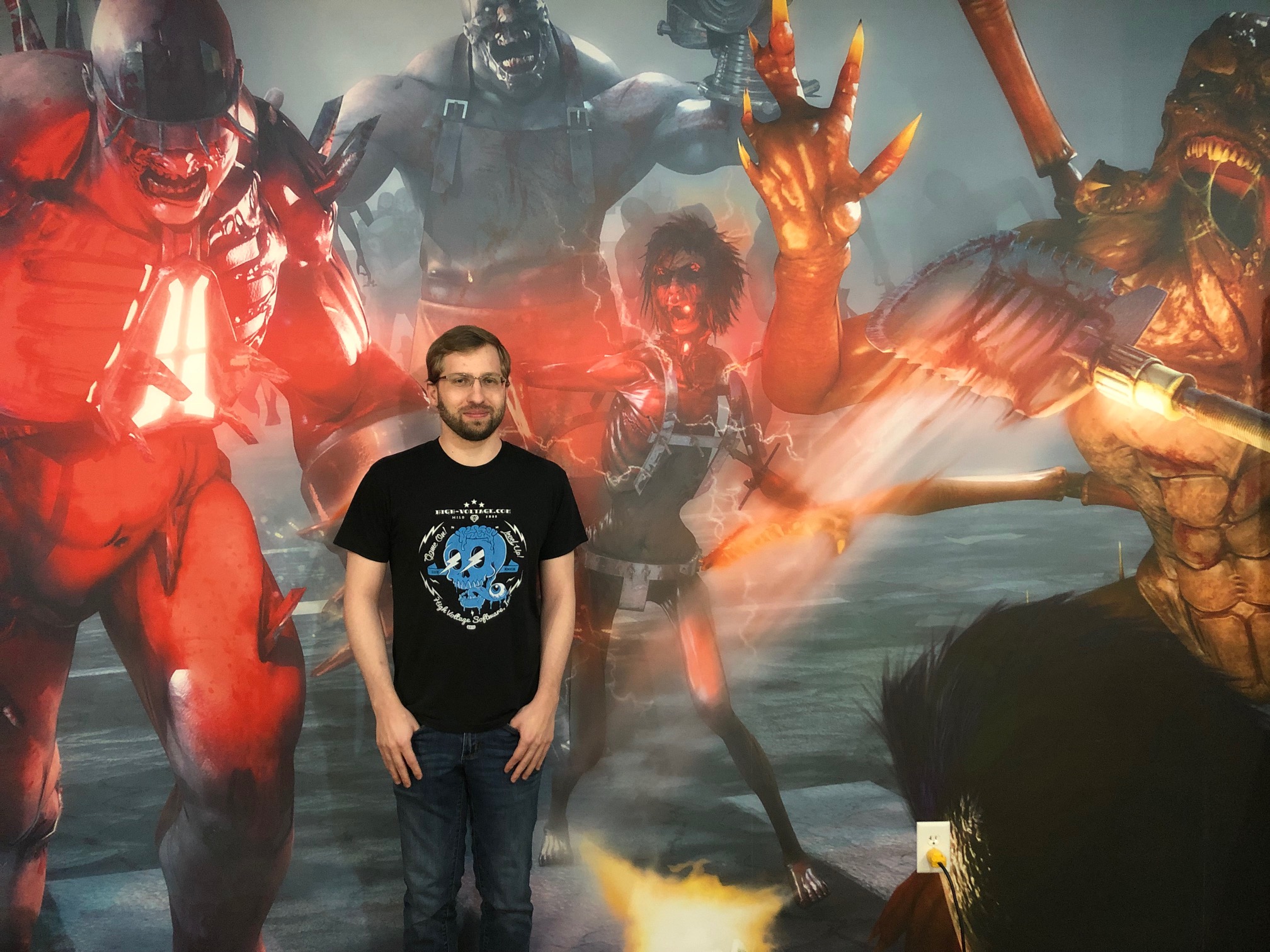 For starters, could you provide a brief synopsis of who you are and what your role is with Killing Floor 2?

I am Tom Weithers and I am a gameplay programmer at Tripwire. Gameplay programmers take the cool ideas the designers have and turn them into something working in-game. Recently I’ve worked on Objective Mode, adding weapons like the Killerwatt, Helios Rifle, Hemoclobber, and a whole bunch of other fun things that I would get in trouble for mentioning now.

Depending on where we are in development, my day will be either feature development or bug fixing.

If it’s feature development, I look at designer documentation about that feature or talk to them directly about what they are looking for. Then I’ll sit down and implement that. We tend to start with a rough pass and over time adjust the functionality based on playtesting. In the meantime, the artists do their magic and everything coalesces.

If it’s bug fixing time, I’ll start with a list of bugs compiled by QA and prioritized by production. Then I do a lot of digging through code to try to figure out the problem. Sometimes the problem is with a system made half a decade ago. And sometimes it’s something I broke the day before.

I went to college at Rensselaer Polytechnic Institute where I dual majored in Computer Science and “Games and Simulation Arts and Sciences”. The dream was always to work in the games industry but I still hedged my bets by getting a normal Computer Science degree in case that didn’t pan out. After my sophomore year I started interning at High Voltage Software back near my home in Illinois and eventually started there full-time after college.

There isn’t one thing I put above all others, but any time a game ships it feels like a huge accomplishment. Even if the next day everybody is doing nothing but tearing the game to shreds (or not talking about it at all). Making games can often feel like carrying around a ticking bomb with you. You sit there for months hoping it doesn’t explode in your face, so when you finally are able to heave it away right before it explodes it’s a huge relief. And, if you’re lucky, the players are perfectly happy to get hit by the explosion.

There are a lot of aspiring programmers that play Killing Floor 2. What are steps and resources you would recommend for these folks to utilize should they want to work in the Games Industry?

There is one big trick for getting into programming or making games or anything else. Just get out there and do it. And keep doing it until you throw your computer out of the window because THIS WAS JUST COMPILING TWO SECONDS AGO AND I DIDN’T CHANGE ANYTHING, THIS IS STUPID, I HATE EVERYTHING. And then you go outside, pick up your computer, fix your window, and start again.

A degree in Computer Science or a specialized Games degree are great to help get your foot in the door. But when I’ve looked at resumes, I cared a lot more about the tangible project experience people have. With Unreal Engine 4 and Unity both free, and many tutorials and documentation available online, the barriers of entry are super low to start and make cool stuff.

What language(s) do you program in?

Almost all the programming on Killing Floor 2 is C++ or UnrealScript (a UE3 specific scripting language). Sometimes I dip into ActionScript to do UI work. In the past I’ve worked with any number of other languages (C#, python, JavaScript, etc.) as the project required.

I play video games, run a D&D campaign, watch sports, read fantasy books, and miscellaneous other hobbies that let me avoid interacting with other people.

What was the first game you worked on? What other game titles were you also a part of?

The first game that I worked on as an intern was the PS4 port of Injustice: Gods Among Us.

I’ve since worked on:

Saints Row: Gat Out of Hell

My favorite game is the original Guild Wars. It’s the perfect combination of strategic build making, teamwork, and real-time decision-making. I’ve beaten each of the campaign’s multiple times, won and casted competitive tournaments, written articles that appeared on the official website, and talked directly to the developers in special playtests. The last of those is maybe the biggest reason I tried to give making games a shot as a career. I lost years of my life to that game and I wouldn’t trade it for the world.