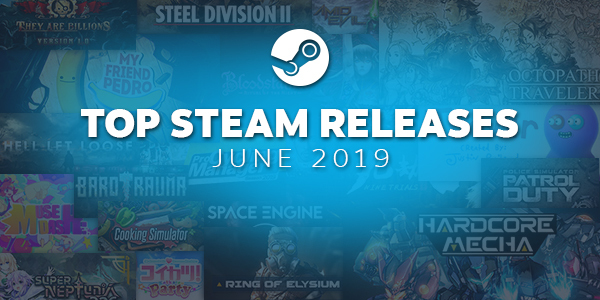 About half of this month’s top releases come from teams releasing their very first game on Steam. Some of these teams have been making games for a while on consoles or for mobile markets, while others are brand-new teams working together for the first time. Barotrauma, Cooking Sim, SpaceEngine, Bloodstained, MyFriendPedro, Super Neptunia, Hardcore Mecha, Nine Trials, Wasteland Survival, Ring of Elysium, and Lords Mobile are all Steam firsts from these developers.

Meanwhile, a total of seven of the top releases either entered or left Early Access in the month of June, continuing to demonstrate a strong interest in a live model of development that incorporates player feedback.

A number of these games found success with niche audience groups, so it’s great to see that those groups are big enough and engaged enough to drive these games into the top 20. Pro Cycling Manager 2019 is a game that traditionally sells to players in Western Europe (France in particular), and is likely propelled by the interest in the Tour De France kicking off just days after release of the game. Meanwhile, F1 Racing’s success would indicate a lot of players are following the latest season of F1 racing and probably have racing wheels hooked up to their PCs. We’re also pleased to see an educational exploration game like SpaceEngine make the list because we all love space, right?

Here is this month’s list of top new releases ordered by release date (we’ve put this list on a handy store page too):

Trover Saves the Universe – 3D platformer action in a bizarre comedy universe from the co-creator of Rick and Morty. Released June 4th.

Barotrauma – Just arrived into Early Access – 2D survival on a submarine plunging deep below the surface of a frozen ocean. Released June 5th.

Cooking Simulator – Play in sandbox mode or take on a career in this cooking simulator with full physics and realistic ingredients. Released June 6th.

コイカツ / Koikatsu Party – Endless customization options and roleplaying with variety of anime companions. Note: This game is marked as ‘adult only’ and requires you to be signed in to view. Released June 10th.

They Are Billions – Coming out of Early Access – Build and survive in this steampunk strategy game set on a post-apocalyptic planet under siege. Released June 18th.

AMID EVIL – A retro fast-paced FPS from the producers of Dusk and creators of Return of the Triad. Released June 20th.

My Friend Pedro – A violent ballet about friendship, imagination, and one man’s struggle to obliterate anyone in his path at the behest of a sentient banana. Released June 20th.

Ring of Elysium – Coming out of Early Access – A free-to-play game with a unique take on battle royales set in an apocalyptic world with natural disasters, player abilities and grappling hooks. Released June 24th.

Pro Cycling Manager 2019 – Manage your own team of professional cyclists and claim victory in over 200 races around the world. Released June 27th.

The above list is generated by looking at revenue as one measure of popularity. But we know that this measure doesn’t fully capture the popularity of free games that many players may be enjoying but that don’t generate revenue the same way as the kinds of traditional paid games listed above. So this month, we’re also adding a list of the top five free games released in June, measured (and ranked here) by peak player count within the first two weeks following release.

This month, Ring of Elysium makes both lists by establishing a solid player base during Early Access and throughout launch.

Dota Underlords – Hire a crew and destroy your rivals in this new strategy battler set in the world of Dota. Released June 20th.

Ring of Elysium – Coming out of Early Access – A unique take on battle royales set in an apocalyptic world with natural disasters, player abilities and grappling hooks. Released June 24th.

Black Squad – Coming out of Early Access – Skill and strategy reign supreme in this military based FPS with a variety of game modes and unlockable weapons. Released June 26th.

Lords Mobile – Clash with 280 million other players on both mobile and Steam in a world of real-time strategy and chaos. Released June 3rd.

Wasteland Survival – Develop your own base and craft specialized supplies in this isometric post-apocalyptic survival game. Released June 3rd.

As we were building the above lists, we got curious about what popular games came out in previous years. So we looked back to a year ago in June 2018, and found the top 5 releases (in order of release date) were
Vampyr, Warhammer 40,000: Inquisitor – Martyr, Jurassic World Evolution, Crash Bandicoot™ N. Sane Trilogy, The Crew 2.