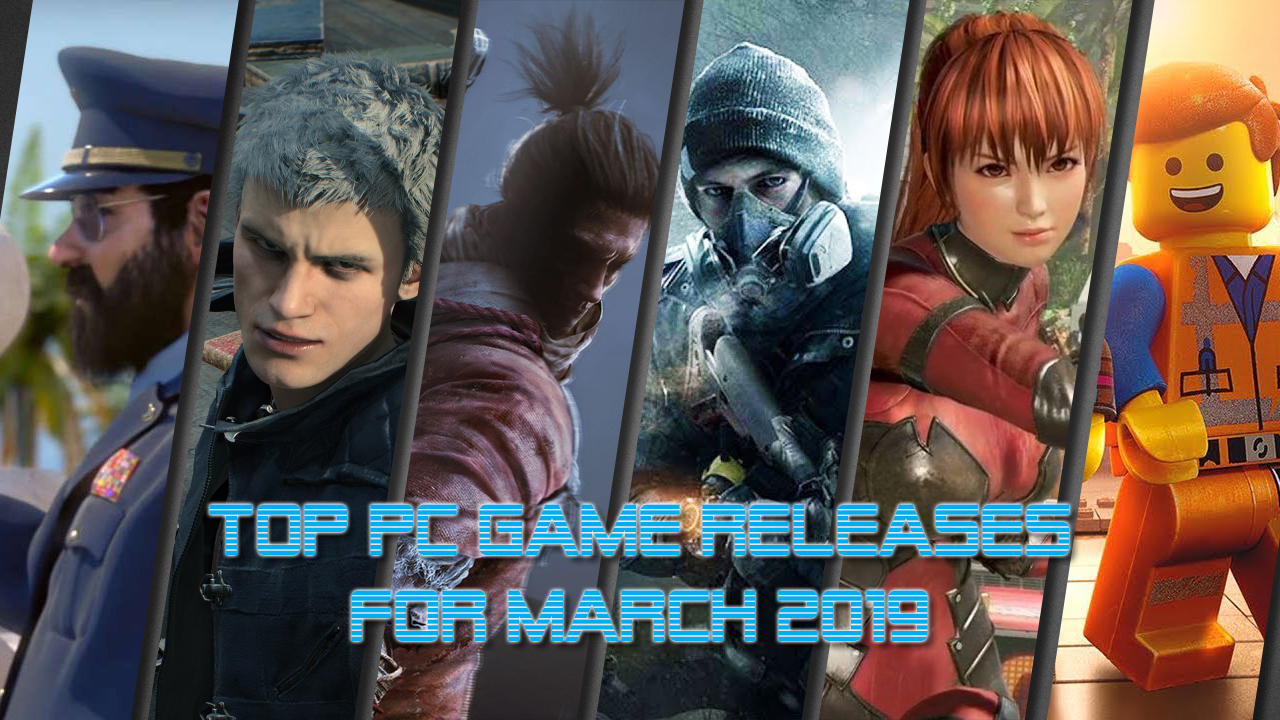 It’s almost March already and you’ve probably got a lot of backlog from February alone. Unfortunately for you, March won’t be any more forgiving as the coming month has some big releases lined up as well. If you’re looking to play something new, here are the top PC game releases for March 2019 for you to choose from.

DEAD OR ALIVE 6 - Combat and Features Trailer
Watch this video on YouTube.

This game didn’t have the best presentation during the recent EVO Japan stream, but try to put all of that aside and concentrate on what this game is really all about. Dead or Alive 6 makes use of a new graphics engine to bring superb visuals, depicting enhanced facial expressions and even sweat and dirt. The new Break System adds more depth to the combat mechanics and the new Fatal Rush makes it possible for beginners to perform flashy combos like a pro. The interactive elements in stages also make for more dynamic fights.

Set in the Front Mission Universe, Left Alive puts players in control of three different survivors in a war-torn country under siege. It’s a third-person shooter with an emphasis on melee attacks plus the option to board mechs called Wanzers. The story of all three characters are overarching and will require players to make drastic decisions with dire consequences. The art was done by Yoji Shinkawa so it radiates a very Metal Gear Solid vibe, while the Wanzers were designed by popular mech designer Takayuki Yanase.

Devil May Cry 5 – Main Trailer
Watch this video on YouTube.

Although Ninja Theory’s reboot was met with critical acclaim, it didn’t really resonate well with the fans. So now, Capcom is back with a true sequel in Devil May Cry 5. Both Dante and Nero are back to bring the beatdown. Joining them is the mysterious V, a boy-band-member-looking teen who can summon demons. This time around, the action is brought to life by the same engine used for Resident Evil 7 and the Resident Evil 2 Remake, which makes for some gorgeous environments and effects.

From the get-go, Massive Entertainment has made it clear that they’ve focused on the endgame for The Division 2. This was clearly an excellent strategy as that was the main problem of the first game. This time around, there are a lot of things to look forward to once you hit max level and finish the campaign: a new threat appears, players unlock specializations and signature weapons, and there are 3 Dark Zones to tackle. That’s probably why the game has more pre-orders than the original despite not being on Steam.

One Piece World Seeker takes infamous captain Monkey D. Luffy and his crew, the Straw Hat Pirates, on an all-new adventure. Explore an expansive open-world set on an new Island with multiple paths to take and large areas to explore. Players can use Luffy’s gum-gum abilities to traverse the world and bring down enemies. You’ll also get to meet familiar faces and take on iconic enemies from the series as you go along. You’ll also get to use Luffy’s signature moves, all animated in beautiful detail.

Any fan of the Souls games from FromSoftware should have this pre-ordered by now. Sekiro Shadows Die Twice still has the signature punishing difficulty the studio is known for, although their latest endeavor does mix up the formula to keep things fresh. Players will be controlling a specific character. They’ll also have access to different prosthetic gear that can be used to various effects, and there’s a resurrection mechanic that gives players a second chance after being struck down.

You and your friends take a out of town. When you return, the world has been taken over by hostile machines. That’s the premise for Generation Zero, a 4-player co-op shooter set in a re-imagined 1980’s Sweden. It features a huge open world where enemies are persistently simulated. Any damage you do to enemies will still be there when you encounter them again. Teamplay is encouraged, if not required, less you want to find yourself at the mercy of the mechanical invaders.

Outward combines RPG and survival mechanics to create the ultimate adventurer life simulator. Here, your character won’t be the chosen one, nor a pre-destined hero, or even some special character with a fate-changing secret. Instead, you start off as a nobody. Developer Nine Dots Studio has paid careful attention to the little details. There are no map indicators, no quest markers, and the contents of your bag affect your movement speed and dodge effectiveness.

Alien monster invaders have ravaged Bricksburg, leaving it in ruins and taking Emmet’s friends. The Lego Movie 2 Videogame takes players through the new movie’s story and beyond. Help Emmet journey into outer space to take on the inhabitants of the Systar System and save their friends. There are new worlds to discover, lots of characters to collect, and even more challenges to test your Master Building skills. Pre-ordering gets you characters from the first movie too.

Tropico 6 - Gameplay Trailer (US)
Watch this video on YouTube.

Tropico 6 entices players to once again take control of an island and start their own dynasty. This time around, you’ll be in charge of an archipelago with several islands. Your task will be to take advantage of the resources on those islands by connecting them via infrastructure and carefully planning where to place your different facilities. You’ll also be able to steal famous landmarks, bring them to your country, and put them on display in one of your own islands.

And there you have it! These are the top PC game releases for March 2019. Some of these are no doubt the biggest titles coming out this year. Just remember, if you decide to pick up any of these game, you won’t find a better deal for them than the ones we have right here at AllKeyShop.com. Cheers!