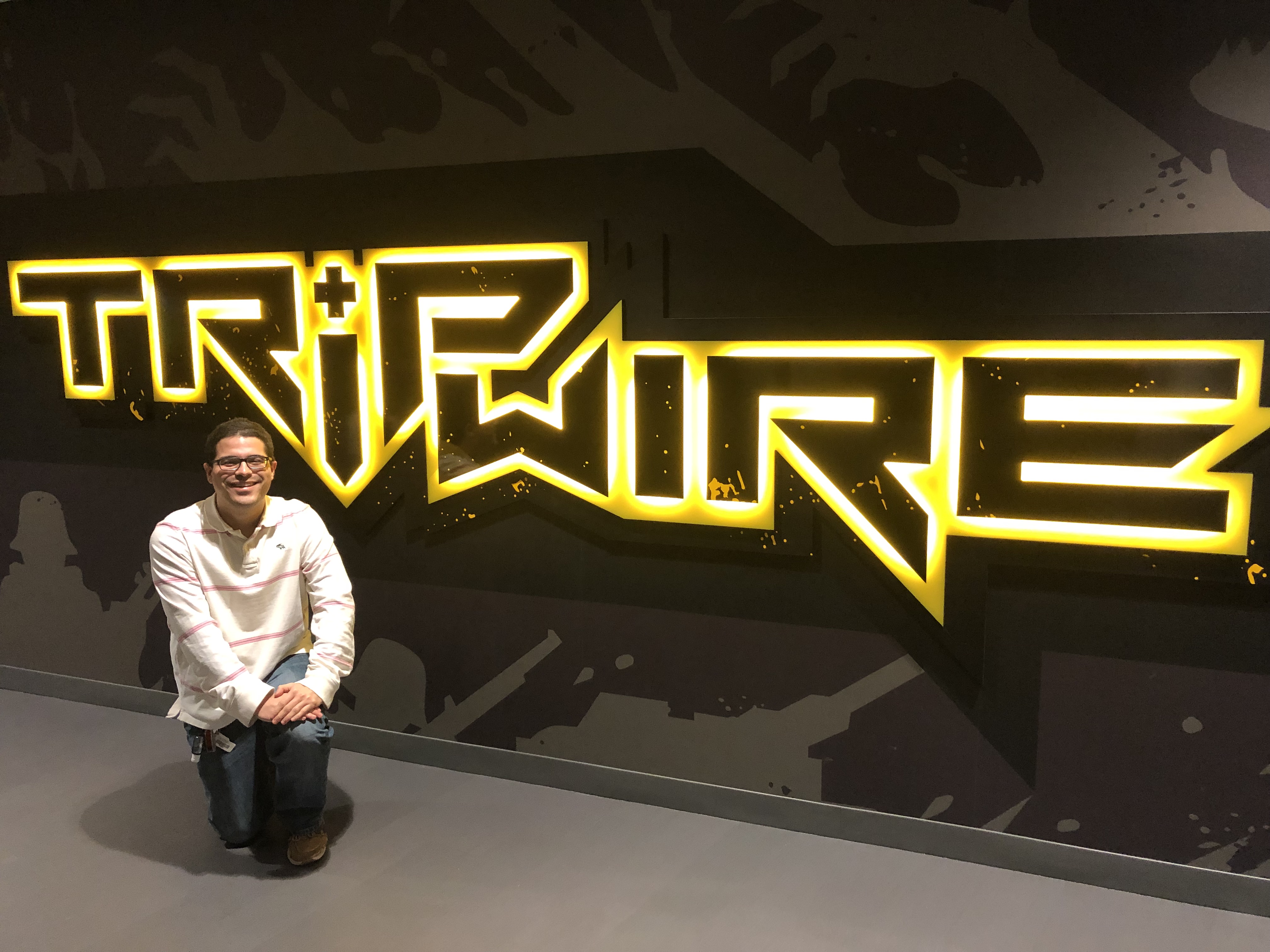 Q. For starters, can you provide a brief synopsis of who you are and what your role is with Killing Floor 2?

A. Howdy everyone, it’s a pleasure to meet you all! My name is Jonathan Betancourt, and I’m a Junior Game Designer at Tripwire Interactive. I work on creating fun, engaging experiences, and this is broken up into multiple roles that touch on different aspects of Killing Floor 2. I adjust values to balance old and new game systems, craft concepts and gameplay elements for future updates, observe and note feedback from our community, work with our community team to address major gameplay concerns, and much more. It’s a highly communicative role that requires a lot coordination with my fellow developers. We all work together to present something enjoyable to our community!

Q. How long have you been employed at Tripwire?

A. I’m currently at 4 years and 10 months. I started as a QA Tester for 3 years. Then, I shifted to a Senior QA Tester role for another full year. After that, I was promoted to Junior Game Designer.

Q. Take us through a typical day of work at Tripwire for you, what is it like when you show up at the office?

A. Sure thing! Let’s see, a typical day starts with me having Killing Floor 2 on one of my monitors and an excel sheet full of numbers on another. I check out concerns from the community, adjust values to help improve the feeling of our systems and weapons, and sometimes, I have to attend a meeting or two that sprout like mushrooms out of nowhere. Sometimes, I’m the one making those pesky meetings! But yeah, I check over a task list and tackle each one throughout the day. While I’m working on gameplay elements and figuring out solutions, it’s a constant back and forth with my brain on how to address a problem. I’m usually tinkering with data sheets and KF2 from the start of the day to the end of it! I don’t think I’ve ever had more than 2000 hours on a game in my life until Killing Floor 2. Steam says I have 4538 hours now…

Q. How did you get started in the Games Industry?

A. It all started at the Georgia Institute of Technology. I worked towards a degree in Computational Media, and this degree was unique because it was the first of its kind at the institute at the time. I was basically part of this degree experiment, and it was like a marriage between programming, user experience, and game design philosophy. There was a lot of writing and a lot of programming…and a lot of program writing. Then, on my final semester of college, I received a QA Tester internship with Cartoon Network at their Turner Broadcasting location in Atlanta. It was literally a 5 minute walk to their office from my dormitory, so that was AWESOME. After I completed my internship with them and graduated from college with my Bachelor of Science in Computational Media (people still ask what this thing means), I phoned Tripwire Interactive and was brought aboard as a QA Tester. It was then that I continued onward to where I am now!

Q. What accomplishment are you most proud of while working in the Games Industry?

A. I remember a time as a QA Tester where we had this infrequent crash that happened during Killing Floor 2 gameplay around the time the Katana was first being introduced. We were getting prepared for a huge debut of Killing Floor 2 at a gaming event, and unfortunately, the team was unsure what was causing this random crash. It was a potential marketing nightmare since if this crash happened on the game floor, it crashes all other players on the server. it would make things rather silly to explain. So, I play a lot as the Berserker Perk, and the crash would normally happen when I played as a Berserker with our other QA teammates. This crash affected all other players, causing them to crash too. So, we couldn’t pinpoint exactly what it was. I had a habit of randomly swinging my weapons against walls and columns while I waited for Trader Time to end, and it was during one game that I noticed the crash happened right as I hit a column with the Katana. Long story short, I spent a few days on hyper speed mode swinging my katana at columns and walls to generate this crash reliably, and it turned out that the impact FX played from a Katana could cause the crash to happen when it spawns on a specific point on an environment object. It felt so good to find the cause of this, and once we fixed it, that was one massive relief moment for our debut!

Q. What hobbies do you enjoy outside the workplace?

A. I’ve gotten into Magic the Gathering last year and have been very much into that. I play a format called Commander, and I head to the local venues to play and enjoy the time with other players. Aside from that, I’m an avid gamer. I play games almost every night with other friends. Recently, I’ve been enjoying Overwatch, Dead by Daylight, and Monster Hunter World.

Q. What was the first game you worked on? What other game titles were you also a part of?

A. I think the first game I’ve ever worked on was Ben 10 Slammers, and this was at Cartoon Network back when I was a budding QA Tester. While there, I also worked on Adventure Time Battle Party, Ski Safari : Adventure Time, and Gem Bound. After that, I joined Tripwire Interactive, and the games I’ve helped out on have been Red Orchestra 2 : Rising Storm, Killing Floor 1, Killing Floor : Calamity, and Killing Floor 2.

Q. What is your all-time favorite video game and why?

A. Oh man, this is a tough one because I love A LOT of video games. Parasite Eve II, Don’t Starve Together, Pokémon Puzzle League, Mario Party 3, Conkers Bad Fur Day…the list goes on. I don’t have an all-time favorite, but rather, I have a list of games that I thoroughly enjoyed and learned a lot from when it came to fun, unique gameplay and stories.

Q. What KF2 system that you worked on are you most proud of? Is there something about this system that players should know about, but perhaps don’t?

A. Hmm, this is another tough one. I’d have to say the cross-Perk weapon system. Originally, Perks stuck to their own weapon sets, and their list of weapons was not as expansive as it is now. Also, a lot of our weapons shared qualities that other Perks could definitely benefit from. So we’re like, “What if the Demolitionist could use the Pulverizer?” or “A Support with the HMTech-301 Shotgun could be interesting as it would give them a healing option to help the Field Medic”. So, we worked towards implementing a system to properly handle a weapon belonging to two or more Perks. And thus, the cross-Perk weapon system was born. Our intent with this system was to expand the weapon choices of a Perk and give hopefully more interesting options to help with different situations. An interesting thing to note is that we only have one weapon that is a cross-Perk weapon to three different Perks. It is the Spitfire, and it currently belongs to the Gunslinger, Firebug, and Sharpshooter. Technically though, it belongs to the Survivalist too, so it would make it a 4-way cross-Perk weapon hah!

Q. Could you give us a glimpse of what you’re currently working on now in Killing Floor 2?

A. Most certainly! I’m currently working on the panic system and two new future weapons. I’m adjusting values and trying to alleviate frustrations with the panic system. As for the weapons, I can’t say too much about them, but I can say that one will be a unique combination of two game mechanics while the other has a gameplay element we’ve wanted to pin down since launch.

Q. What are you most excited about in the coming update and why?

A. I’d have to say the Killerwatt weapon. I love charging it up and releasing a beam of pure destruction on the Zeds. It’s quite satisfying to use!

Q. Do you have any personal tips n’ tricks when you play KF2 that you’d like to share with the community?

A. I’ll gladly share some! Spatial awareness and good positioning are an important aspect of Killing Floor 2. Always keep an eye out on your surroundings so you don’t accidentally back into a corner and become Zed food! Also, note where any potential exits are so you can vault off if things get too hairy. It can be easy to lose track of the environment while you’re fending off Zeds so it’s a good habit to take a quick snapshot of any area you’re holding out on so you have a better plan of maneuvering around. Also, remain close to anyone who is healing the team, such as your Field Medic, and protect them whenever you can. It’s a lot of fun to run off and kill Zeds around corners, but remember, Field Medic weapons require you to be in their line of sight to heal. So, try your best to stick to your team and help healers do their role easier.