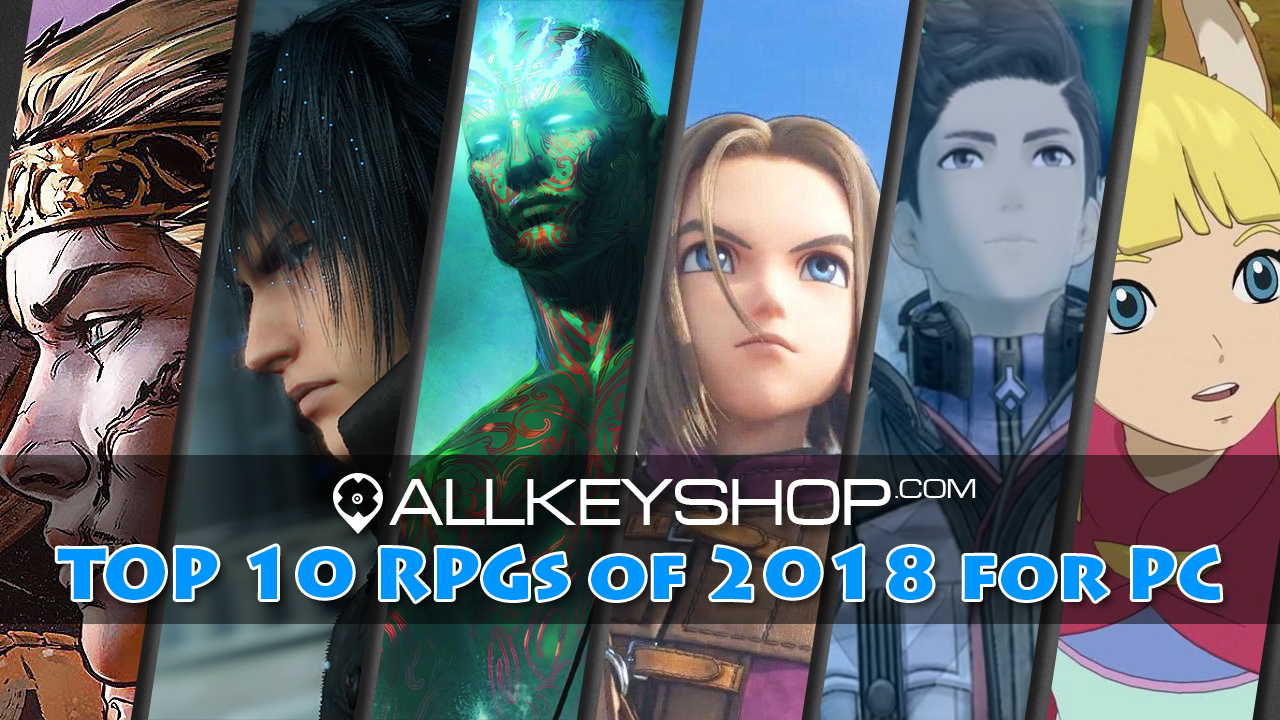 It’s hard to distinguish whether a game is a role-playing game or not these days. In fact, almost all games that have some sort of story built-in has at least some RPG mechanics interwoven to its core gameplay. But, no matter what form it takes, be it strategy, cRPG, JRPG or even a CCG RPG, we gamers are suckers for a good RPG. That’s why we’ve listed the Top 10 RPGs of 2018 for PC so you can just take your pick if you’ve got an inkling for some role-playing goodness.

Pillars of Eternity 2 Deadfire takes the award-winning gameplay from the first game and slaps on a seafaring mechanic to it, as well as graphical and mechanical improvements. This naval aspect plays well with the fact that the sequel is set on an archipelago filled with remote islands containing undiscovered secrets. The game’s fully orchestral soundtrack does wonders for the game’s atmosphere. There’s also some changes to combat mechanics that players will find refreshing, such as ability use being restricted per encounter rather than per rest. Overall, it builds on an already great RPG without alienating fans of the series.

Although the highly anticipated next entry in one of the longest running RPG series may have launched later on PC than on consoles, but the wait was definitely worth it for this massive title, if only for Gordon Freeman’s HEV suit on the Steam version. Seriously though, this game does not play like a traditional Final Fantasy title, more like an action RPG in fact, but that’s not necessarily a bad thing. The story and map size are epic and there’s a multiplayer component for those wanting to play with friends.

The next Witcher game comes in the most unexpected form, a card game! Don’t let the CCG-based combat system fool you though, this is through and through a Witcher RPG filled with choices and consequences, and brimming with lore and story. Characters you recruit are represented in combat as cards which means if an action or decision you make causes them to leave your party, you lose their card as well. For something that started out as a singleplayer mode for a spin-off, this is one card game even those not interested in the genre will be happy to take on.

Although the second and third games have yet to arrive in western shores, bringing the fourth game ahead of those two was a great decision for Sega. This is because Valkyria Chronicles 4 happens in the same timeline as the first game, making it a great entry point for those new to the series. The story unfolds in a sort of story book style, while combat is a hybrid of turn-based strategy and third-person shooting. It’s no standard JRPG, more of a different take on the strategy RPG genre, but it’s definitely worth a go.

Ni No Kuni 2 Revenant Kingdom made lots of changes from the beloved first game that it divided fans before launch. Ultimately though, it ended up becoming one of the most charming and enjoyable JRPGs in recent times. The Tales-x-Pokemon combat has been dropped in favor of a more straightforward real-time hack-n-slash combat system. Instead of monster collecting, the sequel will have you recruiting Higgledies that can be summoned in combat for tactical advantages. And, if for nothing else, the art style is absolutely gorgeous.

Although not as big in the west, the Dragon Quest series is highly celebrated in Japan. It’s eleventh numbered entry won’t be reinventing the JRPG wheel, instead it utilizes familiar systems developed and optimized to bring their strengths out. Although you can only have four characters active in combat, each character has their own strengths and weaknesses that pushes the player to mix and match their party. This keeps combat from becoming monotonous. It also features a unique crafting system that players will find highly enjoyable.

While most medieval RPGs tend to feature magic, supernatural forces and mythical creatures, Kingdom Come Deliverance prides itself on its focus on historical accuracy and realism. This translates into the game’s themes and combat system. The first-person view and lush landscapes result in great world immersion, aided by the game’s great sound design and music. Players will follow the story of Henry, a blacksmith’s son, whose story starts off as a run-of-the-mill quest for vengeance but quickly evolves into an epic tale to save the kingdom.

Part action game and narrative-focused adventure, Vampyr is one game where the atmosphere and music will have players immersed in the early 1900’s recreation of London. It tells the story of a doctor who has been turned into a vampire and will have to balance his oath to save lives with his thirst for blood in a city gripped by disease and conspiracy. The city is affected by your actions and the story reflects the consequences of your decisions. This is one game that takes risks, and sure may have missed a few marks, but definitely came out a winner.

The long-awaited sequel to the series that started way back on the Apple II brings back the humorous dungeon-crawling adventure that many will remember to be their first RPG experience. The Bard’s Tale 4 features an interesting world filled with intricate puzzles and dangerous foes. The music and sound design are exceptionally well done and the combat system, although not revolutionary, focuses more on improving what’s already worked well. Ultimately, this is game that fans of the series and classic dungeon crawler RPGs will definitely want to jump on to.

Although cRPGs have definitely made a comeback through crowdfunded hits like the Pillars of Eternity series and the Divinity Original Sin series, the cRPG revolution is far from over. Pathfinder Kingmaker is the first game set in the Pathfinder tabletop universe and is brimming with nostalgia from the golden days of isometric RPGs. It features a wide range of classes, powers, spells, and class abilities for players to choose from. Claim your throne, expand your kingdom, keep enemies at bay, and lead your people as you forge a timeless legacy.

And that’s it for the Top 10 RPGs of 2018 for PC. These are the best role-playing games out this year and you can find the best deals for them right here at AllKeyShop.com. Give in to your gaming craving now and take advantage of these sweet deals. Cheers!

Top 10 FPS Games of 2018 for PC: Looking for some action-packed shootfests? Here’s the best list to check for the hottest first-person shooters this year.

The post Top 10 RPGs of 2018 for PC appeared first on AllKeyShop.com.