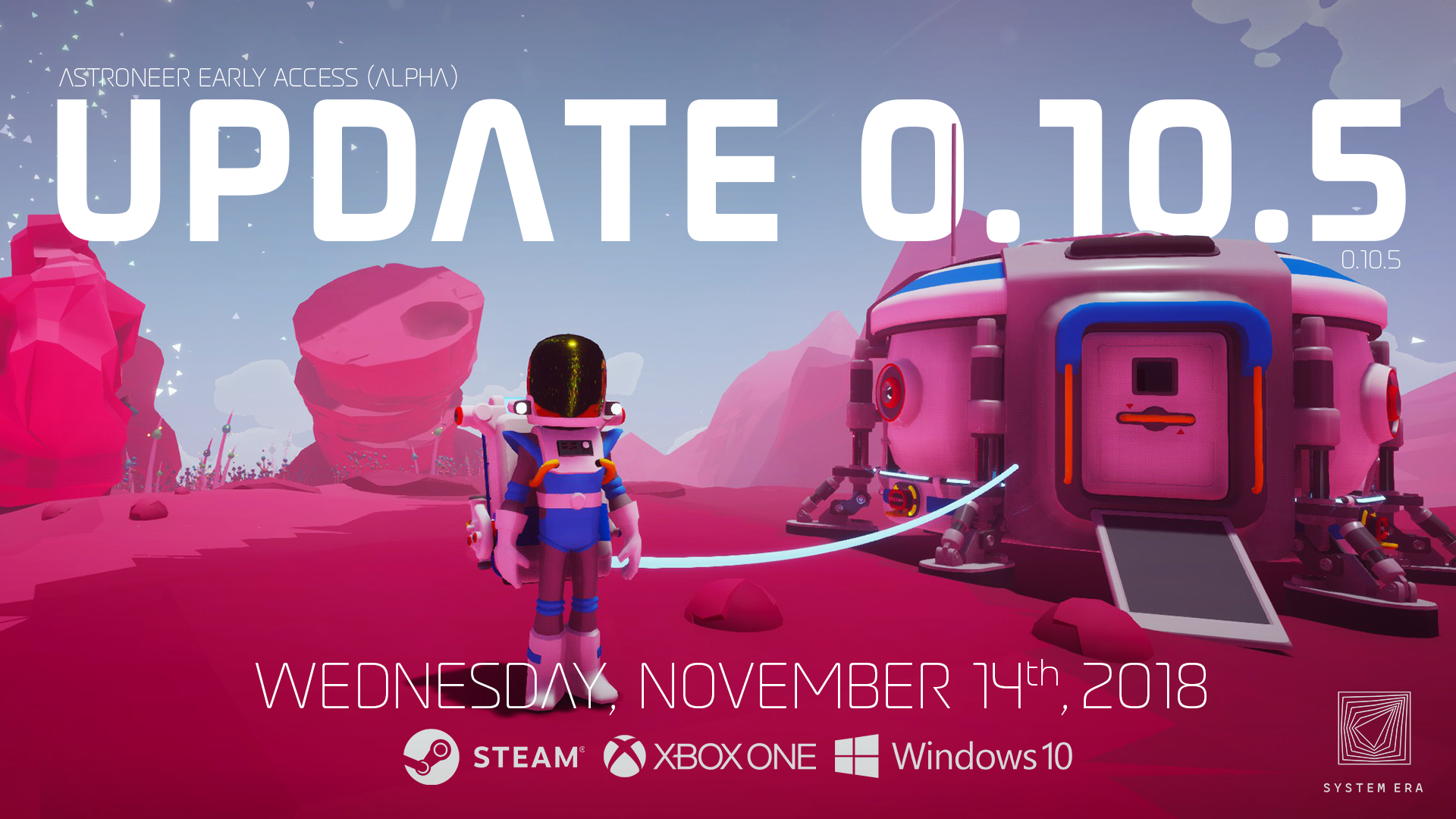 Update 0.10.5 contains a Tech Test of a new planet using an early version of Terrain 2.0, a new suit only for Early Access and Play Anywhere players, and bugfixes for the main version of the game. This will be the final early access update before 1.0!

This build includes a first look at an early version of Exotic Moon. We are using it as a stress test for Terrain 2.0, the new technology we are using to generate planets. This planet is an earlier unfinished version than the current development one, so it will be missing large parts of the gameplay loop. You should expect to encounter bugs and missing gameplay. If you do, please report them on our forums so we can track major issues as we go through our bugfix phase before 1.0! No amount of feedback is too small! You can access the build by scrolling left on the starting menu space ship and loading “Terrain Tech Test” 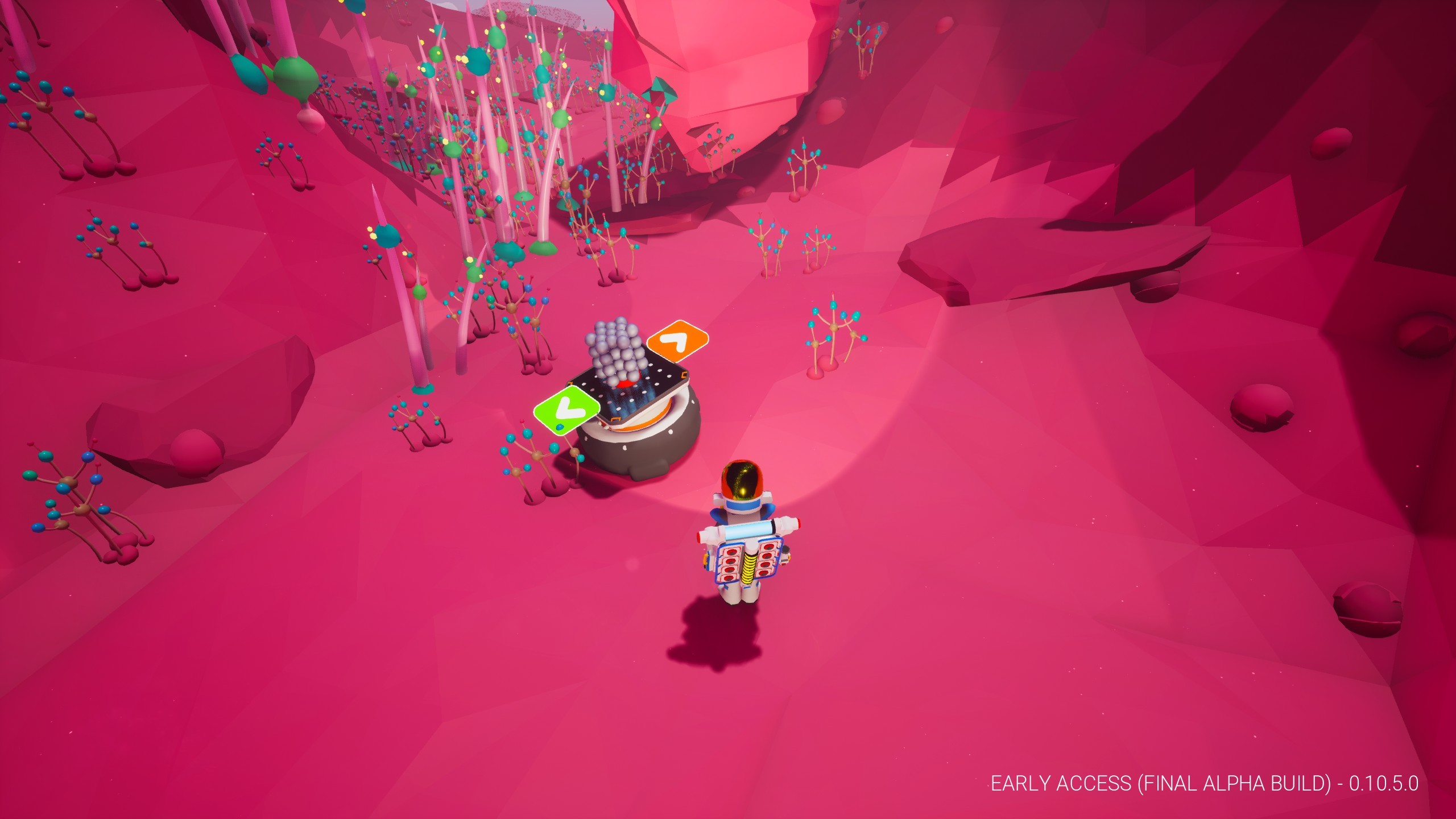 Because the planet has missing decorators, effects, research, and resources, Exo Dynamics has provided the Astroneer with 100k bytes, and an experimental development plinth that provides all necessary resources to craft items. Consider this an EXTREMELY loose test for players who want “Creative Mode” type experience. Please give us feedback on what you would like to see included if Astroneer added a dedicated creative experience after 1.0!

Also, the planet has a fixed seed, so every player of the game will experience the same exact planet. Share your favorite mountains, caves, craters, and with others and directions on how to get there using the Astroneer’s compass! 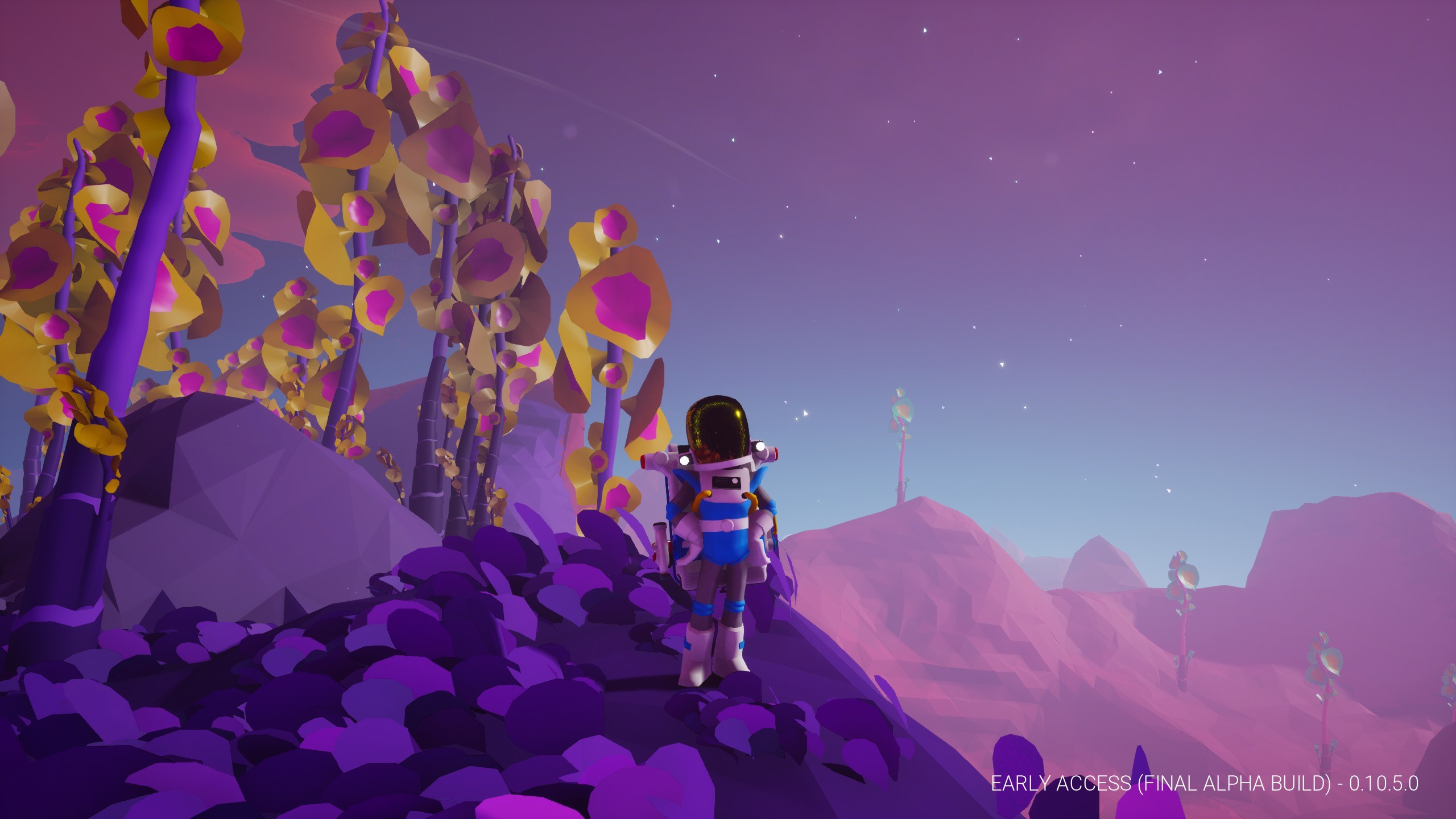 As a gift to everyone who supported us throughout development, a new suit has been added to the game! This “Retro” suit is exclusively for Early Access players of Astroneer as a thanks for your ideas, bug reports, feedback, and encouragement. Anyone who owns the game before 1.0 will receive the “Retro” suit, and we have no plans for making it available to post 1.0 players. Thanks so much for your support thus far!

The following live issues have been fixed as of version 0.10.5.0:

Just in case you missed it, Astroneer now has a solid release date, February 6th, 2019! While we hoped to release the game into 1.0 right after the two year anniversary of our Early Access + Game Preview release in mid December, we have made the tough decision to delay the game 6 weeks to make sure we meet the quality bar we have for what we consider a polished 1.0 experience. The game is all but finished, but we ate up too much of our bugfix and performance time that we had slated for the end of development, and feel the few extra weeks of work will allow us to make Astroneer 1.0 a polished experience. We hope our players will understand! For more context about the decision, check out our developer Q&A that we posted on Youtube today, and then check out the release date announcement trailer to see just how different Astroneer is:

We always said we would revisit this once we got closer to 1.0, and now that we are here, it is time! Astroneer will be officially moving to a 1.0 launch price of $29.99 USD on November 19th, 2019. Our 19.99 price point was always seen as a discount because the game was unfinished. Just as a reminder, Astroneer 1.0 will include 7 entirely new planets with multiple brand new biomes, new vehicles, modules, items, suits, and an exploration based experience! This also includes around a years worth of completely free content updates. You can view future content being considered on our roadmap!

One last thing to mention: This will be Astroneer’s final Early Access update, and anything that you see from here on out is a preview of the 1.0 version of the game. Also worth mentioning that saves from this last build (0.10.5.0) will not be compatible with the 1.0 version of Astroneer.

That’s all for now! This final update is a bittersweet one, this Early Access journey has been an amazing experience, and we cannot wait to deliver an incredible game on February 6th that we can all be proud of having worked on together. Thanks so much from every single member of our team.