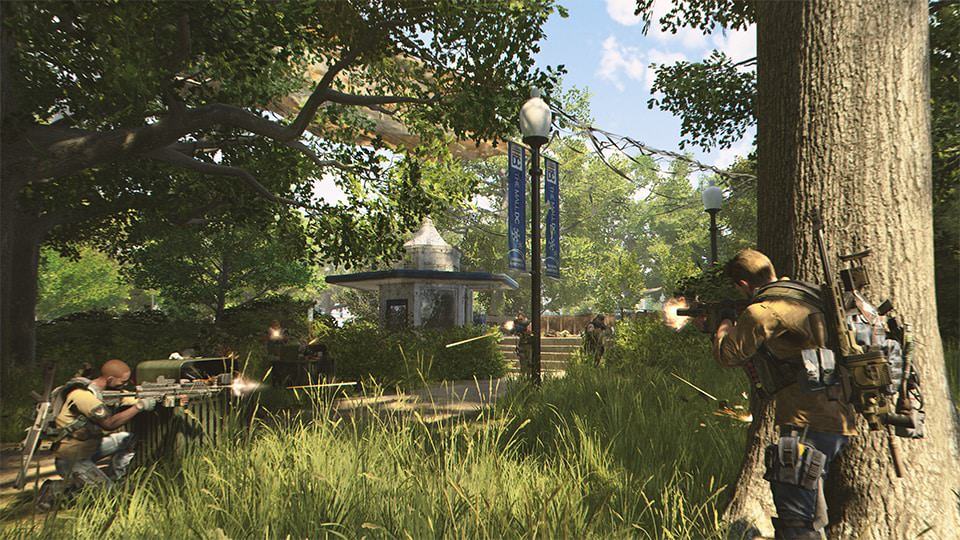 Welcome to the third Intelligence Annex—our series of detailed development blogs covering all aspects of The Division 2. This month, we are covering five different skill categories: the Chem Launcher, Drone, Hive, Seeker Mine, and Turret. Each skill category comes in several variants with very different gameplay and effects. These are just some of the skills you can expect to see on March 15th, so prepare for more options and build customization! If you are new to The Division 2, skills are specialized abilities that change the way you play the game. They provide advantages in combat that directly affect the outcome of your engagements. Whether you want to specialize in offensive abilities or roll full utility, the choice is yours.

First on the list is a new skill that we are introducing in The Division 2—the Chem Launcher. As a grenade launcher inspired weapon, the Chem Launcher fires various ampules of chemicals in an arc that disperse into a cloud on impact and linger to cause unique and devastating effects. When you have the Chem launcher equipped, you can choose between four different chemical charges:

In The Division 2, we have drones! When deployed, the drones hover around your shoulder and follow you around. Depending on what drone you equip, it can stay passively by your side until assigned an order or it can automatically target your enemies and even friends in some cases. There are five different categories of the drone:

Also new to The Division 2 is the Hive—a group of advanced micro-drones that deliver special effects to their targets. You either place or throw the Hive, which affects targets within its radius. While most Hive categories are used primarily for defensive measures, there are offensive alternatives to suit all playstyles:

Here is a skill every Division Agent should recognize — Seeker Mines! These spherical, self-propelled ordnance delivery devices are returning in The Division 2 with more features and abilities. These mines use sensors that allow them to target hostiles — or friendlies — as needed to perform various effects. You can activate Seeker Mines by dropping them to the ground or throwing them straight into the action. Each category offers something new to Agents in the field:

The last skill on today’s list is no stranger to Division players — the turret. This compact, self-unfolding device tracks and shoots designated targets. Turrets can be placed next to you with a quick-press of the Skill button or thrown a short distance with a long-press. Let’s discuss turret variants:

Remember that the game is still under development and all the names and details are subject to change.

Which of these skills are you most excited to use on launch day? Be sure to join us over on the Official Forums or on the community Reddit to discuss today’s article; we would love to hear your thoughts! We will be releasing these articles regularly, so remember to keep an eye out!