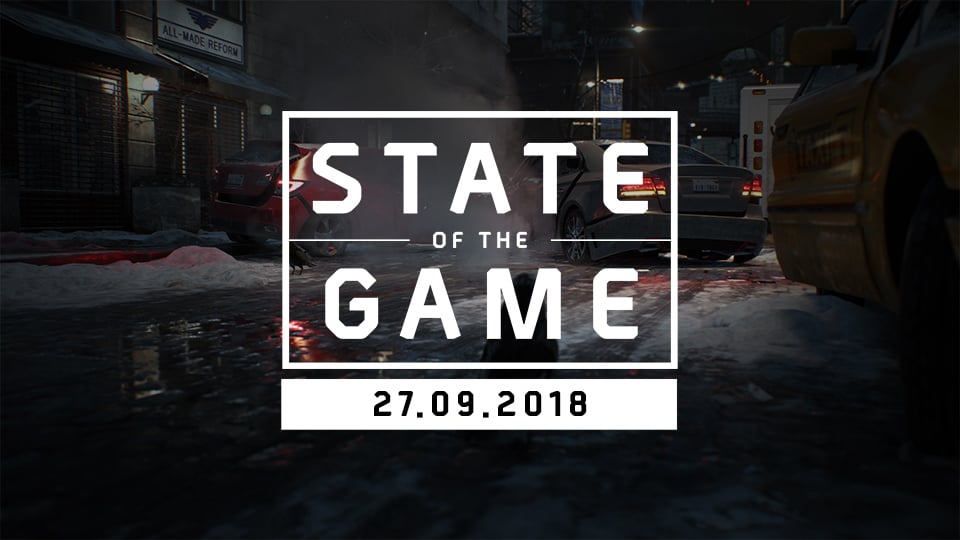 During the last State of the Game[tomclancy-thedivision.ubisoft.com], Community Developers Petter Mårtensson and Yannick Banchereau discussed the Talon Shield launch and provided a roadmap of Division activities for September.

Petter and Yannick are back this week to talk about our in-game event schedule for October and the first of our development blogs for The Division 2, tackling the topic of weapons.

If you missed the stream, you can check out the Twitch VoD[www.twitch.tv].

Our first entry in our “Intelligence Annex” developer blog series is being released today on our official website. In today’s blog we will be deep-diving into the weapons of The Division 2, tackling subjects such as the main weapons, side arms, exotics, grenades, mods and weapon talents.

In addition, Fredrik Thylander – Lead 3C Designer on The Division 2 will be joining us in next week’s State of the Game stream to talk about the philosophy behind the weapons and changes made in the sequel. If you want to learn more about the work that has gone that aspect of the game, don’t miss it!

Our developer blogs will be releasing on a regular basis leading up to the launch of The Division 2 and there are many more topics to come. Stay tuned!

Finally, we also shared some of our footage from Stockholm Comic Con. If you want to see what the convention was like but missed the stream, you can find it in the Twitch VoD.

As the month of October is almost upon us, we wanted to share a number of important dates coming up for The Division.

We hope that you enjoy the activities planned throughout the month and we will continue to provide monthly roadmaps moving forward to keep you as informed as possible.

As always, be sure to join us over on the Official Forums[forums.ubi.com] or on the community Reddit if you’re looking for a place to discuss all things related to The Division.