Nominate Your Favourite Games for The Steam Awards 2019 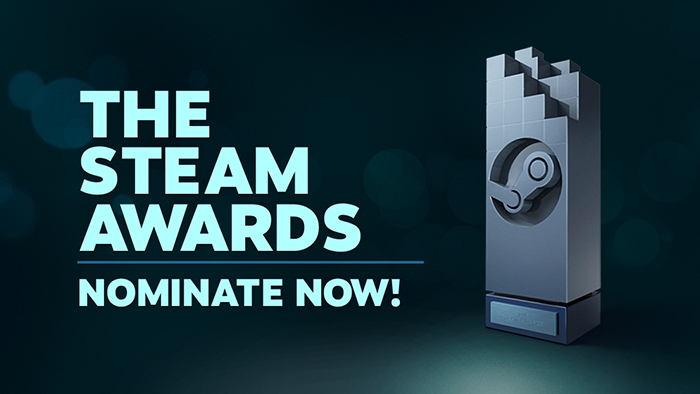 Valve is calling upon the Steam Award Selection Committee once again to help determine the final nominee lineup for this years The Steam Awards. That committee just happens to be comprised of all Steam users so if you want one or more of your favourite games to make the cut, make sure to take advantage of the power of democracy.

There are 8 categories for this year’s awards. As tradition goes, most of the awards are pretty straightforward but a number of them are a little more creative. Take “The Best Game You Such At Award”, in which players are invited to celebrate games that tested their limits (and the how strong their monitor, keyboard or mouse are against sudden fits of rage).

Here are this year’s categories together with Steam’s description of each one:

The Game of the Year Award

Maybe it was its immersive gameplay, or its gripping story… its well-crafted characters, immaculate design, or addictive multiplayer. Whatever the reason, the winner of 2019’s Game of the Year Award is an instant classic.

The VR Game of the Year Award

When it comes to breaking new ground in games, there is no greater pace of advancement than in VR. If we had our way, all VR devs would get an award for building the future of immersive games and experiences unparalleled by any other medium. But since there’s only one trophy, it’s up to you, Steam Awards Selection Committee member, to crown just one as the best of 2019.

The Labor of Love Award

This game has been out for a while. The team is well past the first unveiling of their creative baby, but being the good parents they are, these devs continue to nurture and support their creation. This game, to this day, is still getting new content after all these years.

The Better With Friends Award

The Most Innovative Gameplay Award

This game is at the front lines of experimentation, pushing the boundaries of the medium with exciting, novel interactions and brain-breaking surprises. This game thinks outside the box, and pulls you out with it!

Some days, only a narrative-heavy game will hit the spot, and this one packs a wallop. It’s as gripping as any soap opera, and as well-tuned as a prestige-TV screenplay. Bravissimo — for making us feel things!

The Best Game You Suck At Award

Games have a way of pushing us past any limits we thought we had. Like a montage sequence, we put in work, training our fingers to be quick and nimble, mastering timing and placement over weeks and weeks. At the end of the gauntlet, we’re rewarded with profound beauty and a deep sense of personal growth. Unless you hurled your monitor through a plate-glass window on the first day.

These devs are the Willy Wonka of eye candy. Visual style doesn’t aspire to real-world graphical fidelity (though a noble goal in itself)… it describes a distinctive look and feel that suffuses an entire game. This game displays visual cohesion and expression that not only fit the game’s world, but make our world look paltry by comparison.

You can cast your votes by going here. The site makes the process really easy by detecting games that you own that released this year. But if you want to vote for a game you don’t own, you can simply search for it as well. Another way to vote is by simply visiting a game’s Steam page and clicking on the ‘Nominate’ button.

Steam is also holding its 2019 Autumn sale which runs across Thanksgiving, Black Friday and Cyber Monday. In case you see a game that you want to buy, make sure to check our page for that game as well as we’ll most likely have a better deal for you. Alternatively, you can download the AllKeyShop Plugin for Google Chrome so you can check out our prices even when you’re browsing through Steam or other video game merchants.

The 2019 Steam Autumn Sale and The Steam Awards nominations close on December 3rd at 6 PM GMT or 7 PM CET. The winners will be announced during Steam’s Winter Sale in December.

The post Nominate Your Favourite Games for The Steam Awards 2019 appeared first on AllKeyShop.com.