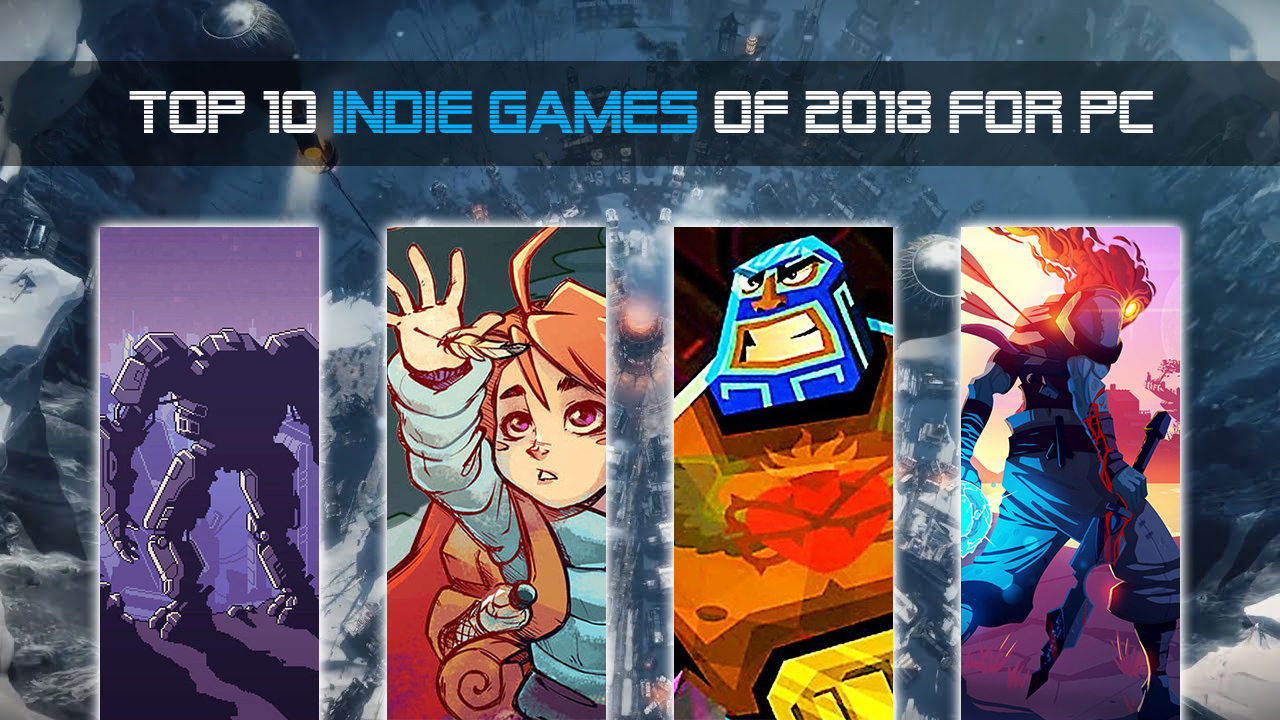 Triple-A games have hit a slump lately, with many highly-anticipated titles ending up as disappointing messes. This has left gamers thinking twice about pre-ordering new entries in even the most established IPs. On the flip side, indie games have been hitting their stride in recent years, and 2018 saw some of the very best releases so far. So, if you’re thinking of jumping on the indie bandwagon for some of the very best experiences you’ll have in gaming, here’s the list for you — the top 10 PC indie games of 2018.

Into the Breach - Launch Trailer
Watch this video on YouTube.

Who knew that packing turn-based tactical combat into an 8×8 grid could prove to be GOTY material? Apparently, the people at Subset Games did! Into the breach thrusts players into the crucial role of saving the world by commanding mechs to fight off gigantic alien beasts. It shines brilliantly because of the fact that every bit of information you need is available to you. That’s not to say this game is easy. In fact, it’s hard and punishing. However, it’s difficulty somehow pushes you to learn from your mistakes rather than give up in frustration. You’ll find yourself just striving to get better and unable to stop playing.

Dead Cells is a strange game. It takes three well-known sets of game mechanics and mashes them all up together. You’d think that the undead creature that spawns from the blended concoction of rouge-lite, metroidvania, and souls-like combat would probably be an ugly mess, but Motion Twin puts it all together so fluidly that you’d think there was nothing to worry about in the first place. Players find themselves unlocking new levels as they die and painfully memorizing boss attack patterns to take down the big baddies on their next try. Ironically, the fact that you’re meant to die makes it just really hard to put down.

3. Return of the Obra Dinn

Return of the Obra Dinn - Available Now
Watch this video on YouTube.

Return of the Obra Dinn revolves around a simple mechanic — you can turn back time with the help of a magical pocket watch. Specifically, it let’s you experience the events that happened moments before a person’s death. This definitely helps out a lot if you’re an insurance investigator looking to solve the mystery of an abandoned ship that’s been lost for years and turns up at the port out of nowhere. This makes for some great 3D puzzles amidst its bold, atmospheric art style. Find some bones, activate your stop watch, and ready your scrutinizing eyes for the investigation. Its mystery compels you.

Celeste isn’t an overly complex game. What it is is a really well-executed concept. You help a girl climb up a mountain through hundreds of rooms of precise platforming, all the while telling an emotional tale that’s filled with optimism. In fact, the whole game oozes with optimism. This is reflected in the fact that dying does not take you to a far away checkpoint. Instead, it takes you to the start of the room you died in, effectively making each room a separate puzzle. Also, where you’d normally find a death screen, you find an encouraging note instead.

DUSK and the Design of 90's FPS Games
Watch this video on YouTube.

If you were gaming during the 90’s, you’d know that first-person shooters used to be about frantic shooting and big, hard-hitting guns. That’s what David Szymanski set out to emulate with DUSK, going all-out with Doom/Hexen-like visuals and pixelated enemies that explode into huge chunks. What makes this special, aside from the truck-load of nostalgia packed in, is the fact that it avoids the limitations of its inspirations — things that held the old greats back due to the fact that it’s all the tech they had at the time. As such, this game feels and plays like a proper 2018 game, and it’s all the better for it.

Undoubtedly one of the best survival experiences to come out in 2018, Subnautica hooked players in with its immersive atmosphere and the freedom it provided in terms of both exploration and choice. The way the story is presented works so well and never feels forced upon the player. Explore the deep waters of an alien world as you try your best to survive while crafting and upgrading your base and equipment. The deeper you go, the better the resources you get, but at the same time, the more perilous exploring becomes.

ICONOCLASTS is out now!
Watch this video on YouTube.

Platforming is the go-to genre of most indie developers, which means there’s a surplus of platformers that range from really bad to extremely good. Iconoclasts is definitely the latter. It combines metroidvania mechanics, challenging bosses, and an excellent soundtrack with some of the most compelling storytelling we’ve seen in a platformer in ages. It also has a deep focus on puzzle-solving that keeps the gameplay fresh. Overall, it’s pretty impressive for a game that’s developed by just one person!

So, you were possessed by a demon a year ago, an event that lead to a trail of destruction so bad that even now that you’re free, you’ve been left without a home, no friends, and on the run from the police. Then, a chance for salvation comes in the form of an ancient society whose sole purpose is to stop evil. Unavowed features excellent writing, notable acting, and uncringey humor. There’s lots of choices to be made plus the puzzles are actually interesting, very seldom frustrating and never rely on guesswork.

Juan the luchador is back exploring through the the realms of both the living and the dead with lots of nods to Mexican culture and folklore. An all-new rendering engine makes the sequel even more vibrant and colorful. The platforming is engaging, the special moves worthwhile and cast of villains sassier and weirder at the same time. The fantastic humor is still present, and the chickens will have you second-guessing reality itself. It’s another metroidvania masterpiece that truly feels like a step up from the original.

Not only is Frostpunk a very engaging narrative generator, it’s also an extremely well-polished city-builder. Don’t get me wrong, it can get really depressing with its unapologetic way of forcing you to make “lesser-evil” decisions, but it’s exactly those difficult choices that you’ve made that makes you want to see everything to the end. It’s ironic how captivating it can be, but it does push your innate human will to survive to its limits, making accomplishing that goal all the more gratifying in the end.

And there you have it, the top 10 indie games of 2018. If you’re tired of playing underwhelming triple-A releases, then pick one of these up and you won’t be disappointed. And, as always, you’ll get the best deals for these great indie titles right here at AllKeyShop.com. Cheers!

Top 10 Strategy Games of 2018 for PC: Looking for a strategy game to test your tactical prowess? Read on to learn about the best releases last year.

The post Top 10 Indie Games of 2018 for PC appeared first on AllKeyShop.com.