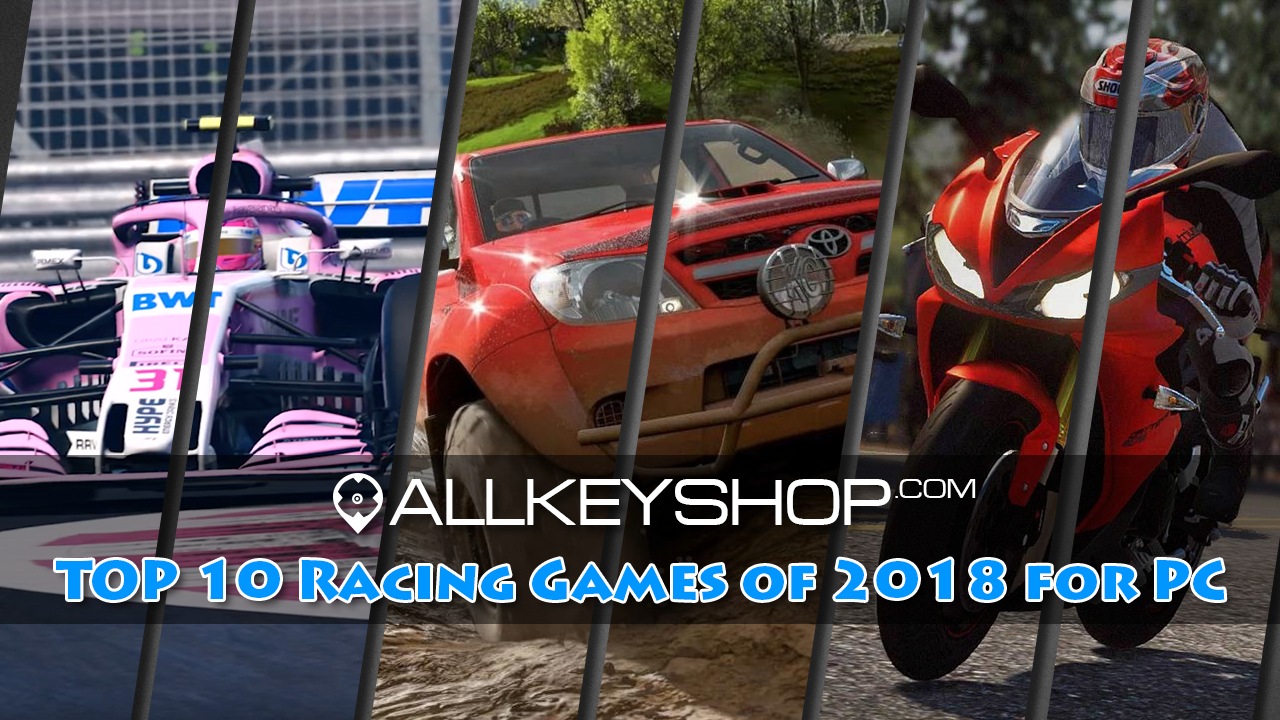 Racing games are a dime a dozen nowadays, so it’s definitely hard to know which ones are worth your time. Even just this year, several have been released to saturate the genre even more. Well, whether you’re looking for a casual arcade racer, a combat racer with full-on destruction, or a realistic racing simulation, you’ve come to the right place because we’re listing the Top 10 Racing Games for PC of 2018. If you’ve got the itching to be speeding, there’s definitely a game for you here. Here are our picks:

This beast of a racer launched to near-perfect to perfect scores from critics and is undoubtedly the best racing game to come out this year. The changing seasons make for some gorgeous environments and the fact that they actually affect gameplay means they’re not just some cheap gimmick. The graphics are also top notch, the customization options expansive, and the ways to progress varied. There were some quirks with the engine sounds for some cars, but Playground Games has been working to fix those and improve the experience even further.

The official videogame adaptation for the 2018 FIA Formula One World Championship has been hailed as the best in the series yet. F1 2018 promises the most immersive experience into the world of Formula 1 any game can offer. The career mode allows players to experience the journey of an F1 driver and his team on and off the track. More classic F1 cars and new circuits have also been added. The game launched with more bugs than any player would have wanted, but Codemasters have continued to iron out the kinks post-launch. This might explain why recent reviews on Steam have been “Overwhelmingly Positive”.

What’s a racing game without some epic crashes? Well, that’s what Wreckfest promises to bring. This game comes from Bugbear, the makers of FlatOut 1 and 2. You won’t be seeing branded luxury cars here, instead you’ll get an old, banged-up car that you’ll need to fix up and then continually upgrade and customize. Bring your creation into the derby arena to establish demolition dominance, or compete in not-so-standard high-speed races on unconventional courses. The game also features fun challenge modes that get you behind the wheel of vehicles like crop harvesters, three-wheelers and more.

If you prefer speeding your way through a course on two wheels rather than four, then Ride 3 should be right up your alley. Sporting beautiful graphics, realistic yet accessible gameplay, and over 230 bike models across 7 categories and 30 brands, players can get to experience a new career mode based on collecting and reading magazines. The Livery Editor features endless customization options to ensure you can dress up your ride according to your style and preference. There’s also 30 tracks to race on, each one faithfully reproduced using drone scanning and photogrammetry technology.

Ten years after its last entry launched, EA is testing the waters for the Burnout series with a remaster. Burnout Paradise Remastered is a great game, but that might be because the original was already great to begin with. The remaster does however include all of the original’s main DLCs off the bat, plus a completely new DLC area. EA has also been pushing out some QOL updates such as being able to retry an event without having to return to the event’s starting point. There’s also the graphical improvements they’ve put in. Some might feel that the asking price is too much, but it’s definitely worth it if only for making the possibility of a new entry in the series that much more likely.

With how retro games have been gaining traction over the past few years, it was only a matter of time until a great retro racer would appear. That’s what Horizon Chase Turbo is. It’s an arcade racer so it’s definitely easy to pick up. Don’t be fooled though, mistakes are very punishing and the tracks can definitely be challenging. You’ll most likely need to retry a lot of races several times and that can become very frustrating, but it also makes finally finishing first that much more rewarding. Also, although this game started out as an iOS game, it definitely does not feel like a mobile game on PC.

GRIP’s main pull is its flippable cars. Yes, this game features cars that can keep on racing even after being flipped upside down. Together with hitting speeds of up to 767 miles per hour, this unique trait allows players to race not only on the ground but also on walls and up on ceilings. The game also features 9 power ups players can pick up mid-race that range from weapons to shields and speed boosts. There’s also an Arena Deathmatch mode where players can face off or team up with friends to dish out total annihilation. GRIP also supports split-screen multiplayer for up to 4 players for some epic couch matches.

TT Isle of Man - The Siren Trailer
Watch this video on YouTube.

Cars and bikes are nice, but this game you actually buy for the track. TT Isle of Man features a faithful reproduction of the Snaefell Mountain Course, infamous for being one of the most (if not the most) difficult and dangerous GP circuit in the world. Choose from 25 riders and 38 motorbikes as you take on the challenge of a lifetime with realistic bike behavior as attested to by real-life TT riders. Compete online with up to 7 other players, or simple enjoy the course in a singleplayer race as you put your driving skills to the ultimate test.

The Crew - Launch Trailer
Watch this video on YouTube.

Can’t decide whether you want to race on land, water or air? Then why not do all three?! The Crew 2 quickly became one of the fastest selling games after it launched earlier this year. Race through the entire USA while instantly switching seamlessly between vehicles like a car, a speed boat and a plane. There’s four different motorsports families to join, complete with their own unique culture and racing disciplines. Also, every time you achieve something, your achievement becomes a challenge for other players in the game world.

If GRIP has flippable cars, Antigraviator goes full-on futuristic hovercrafts. Set in the year 2210 where technological advancements have made it possible to hold intergalactic tournaments for floating cars, the game boasts five different worlds with three tracks each. You’ll have to stay sharp as maneuver pass enemy attacks and use environmental traps to gain an advantage. Customize your Grav as you balance out its stats to fit your tactics and apply different unlockable skins to show off your style.

And that’s it for the Top 10 Racing Games for PC of 2018. These are the very best the year has had to offer for speed-hungry gamers. If one or more of these games have caught your attention, make sure to check out the best deals for them right here at AllKeyShop.com. You won’t find better deals anywhere else on the web. Cheers!

Top 10 RPGs of 2018 for PC: Got an inkling to play a role-playing game? Here are this year’s finest offerings listed with our best deals for them.

The post Top 10 Racing Games for PC of 2018 appeared first on AllKeyShop.com.